Moldavite is a precious stone, a natural green-colored glass with a characteristic surface structure called sculpture. Moldavites are the only European tektites, rocks formed as a result of a meteorite impact. According to the most probable theory, moldavites were formed together with the formation of the Riesa Crater, which can be found between Nuremberg, Stuttgart and Munich and in which the medieval town of Nördlingen is located. The entire crater has an oval shape resembling a hexagon with rounded shapes. The Swabian tectonic line passes through the center of the Riesky crater, which is very clearly visible in its western part. The diameter of the crater is 24 kilometers. It is estimated that the Ries meteorite measured an average of about 1 kilometer. As with other impact sites, this crater is not the only one (36 kilometers to the southwest is the Steinheim crater with a diameter of 3.8 kilometers, which indicates the decay of one body when passing through the atmosphere into two, or the flight of two bodies into the atmosphere).

The richest deposits of moldavites are located in southern Bohemia in the areas around the Vltava River. The main area of ​​moldavite deposits is the upper Vltava basin, especially the belt of localities between Prachatice and Trhové Sviny. Moldavites found in Moravia (mainly in the central area of ​​the Jihlava River) are sometimes called Moravian (it is an unused, possibly local name).

Moldavites are chemically almost identical to clayey rocks, but unlike volcanic glasses, for example, they contain almost no water. Moldavite glass contains certain "defects" in the form of air bubbles, which are common mainly in South Bohemian moldavites. Bubbles tend to be small, on the order of only tenths of a millimeter, but we also managed to find bubbles over 1 centimeter long. The pressure in these bubbles is surprisingly low, 19 to 25 times lower than sea level pressure, leading to the belief that the moldavites formed in a lower pressure environment (such as higher atmospheres). In some moldavites, there are even traces of flight through the atmosphere in the form of aerodynamic rounding. It is estimated that the total number of all fallen moldavites is 20 million pieces with a total weight of approximately 275 tonnes (another source states up to 300 tonnes). Large amounts of moldavites were washed into rivers, transported and then deposited in sediments, where they were etched for millions of years by aggressive natural solutions. The etching of the unequally resistant surface of the tektites then resulted in variously articulated and deep wrinkles of the individual pieces, which we call sculptures.

The largest found moldavite in the Czech Republic was discovered near Slavice and weighs 265.5 grams. 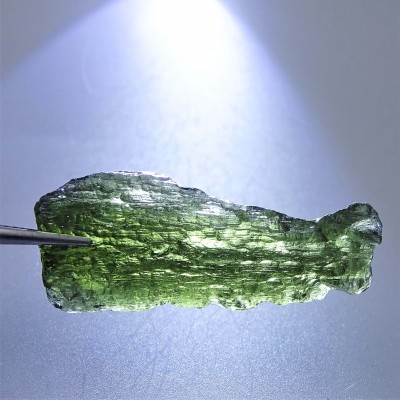